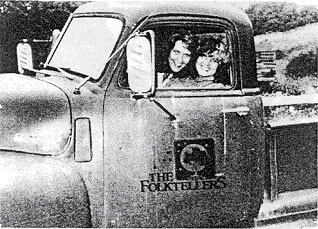 Once upon a time, nearly 20 years ago, two cousins from the South got in a truck and drove all over the United States telling stories to audiences who had forgotten or never knew the age-old storytellers' art of talking to the heart and leaving imprints on the soul.

The Folktellers® Connie Regan-Blake and Barbara Freeman, knew they were happiest telling stories when, in 1975, they left their jobs at the Chattanooga Public Library in Tennessee, pooled their resources to come up with $2,000 between them plus a pick-up truck with a camper named 'D'Put,' and set off to 'live the life of storytellers." What they didn't know was that they would be trailblazers in the amazing storytelling Renaissance that has since swept across America.

Connie: When we first started, we didn't know of anyone else out there making a living as traveling storytellers. The word 'storyteller' wasn't out there yet. Sometimes we had to convince people to let us perform..

Barbara: We'd get to folk and music festivals and tell them we were storytellers, and they'd look at us and say, 'Well, I just don't know, we've got a big crowd out there, ' and sometimes we would have to tell them a story off to the side. We'd say, 'Here's a little sampling,' and then we were hired from that point on.

What audiences got from The Folktellers® was the experience of listening to stories told with energy and consummate skill by a duo that loves literature and books and performing. Following the advice they give anyone interested in telling stories, Connie and Barbara relied on their own heritage and began building a performance repertoire drawn from the broad Western European tradition in general and from the wealth of Southern mountain and Appalachian tales in particular.

For three years Connie and Barbara lived in their truck/camper. 'D'Put" was office, home and prop room. Festival organizers, friends, and listeners helped spread the word about The Folktellers® and the "new' art of storytelling captivating their audiences. Steadily, a strong foundation was put in place. Ready to do odd jobs on the road if necessary, Connie and Barbara never had to do anything other than tell stories.

In 1978, they decided to settle in Asheville, North Carolina, a beautiful place in the Western Carolina Mountains. A feature story published about Connie and Barbara in the School Library Journal, a highly respected international magazine, unleashed an overwhelming response. Readers wanted to know more about storytelling. They wanted to do it too. And they wanted to book The Folktellers®. Within 6 months over 1,000 letters requesting more information had landed in Connie and Barbara's hands. Over the next seven years these intrepid ladies traveled the length and breadth of North America and performed as well in Europe and Asia. Now, however, they logged their travel miles on planes and no longer slept in the camper.

Generous with their knowledge and aware of people's growing hunger for stories and for telling stories themselves, Connie and Barbara became founding members with organizer and good friend Jimmy Neil Smith, of NAPPS (The National Association for the Preservation & Perpetuation of Storytelling). They served on the Board of Directors for ten years and helped shape the Festival and resources that have given direction to so many storytellers working today.

Connie: Today when you mention storytelling to people they say 'Oh, I read about that in Parade Magazine," or "I've seen that on public television,' or 'I heard a storyteller." That's the major difference between today and when we started. People are just ready for stories. Did you know that now there are over 1,000 people who make their living telling stories all over the country? And there are lots more than that who actively do storytelling in their communities....

Barbara: Everywhere we go we hear about groups getting together, very informal, once a month, and having a pot luck and then telling stories afterwards. It is exciting.

As storytelling awareness kept growing over the past decade and a half, The Folktellers® continued evolving as artists. Since 1982, they have produced six wonderful tapes of their stories. Three of them have been honored by the American Library Association as ALA Notable recordings, most recently in 1993 when The
Folktellers®’ tape was one of just 28 (including work by Robin Williams, Max Von Syndow, and Arlo Guthrie) chosen from the 400 submitted.

In 1985, Barbara and Connie co-wrote and produced a 2-act play called Mt. Sweet Talk. They worked with their friend John Bassinger, a talented writer, director and actor and one of the founders of the National Theatre for the Deaf, and with his daughter SAVANNAH, and have described the project as a true 'creative leap." Initially, planning to put together a two-woman show with powerful, polished transitions between stories, Mt. Sweet Talk actually became a fully scripted play with strong female characters, Sarah and Jenny Rose, played by Barbara and Connie. Instead of telling about mountain characters and their lives, they became the characters on stage. The underpinnings of the script were the stories Barbara and Connie had been telling meshed with their own family history. They also worked with the devices theatre offers - lighting, sets, and more blocking and stage movement than storytellers usually utilize. Connie and Barbara's husbands, Phil Blake and Mike Vaniman, helped immeasurably with technical theatre work and advice. Mt. Sweet Talk ran every summer for eight seasons at the Folk Arts Center near Asheville receiving rave reviews from magazines like Southern Living and shows like Good Morning America. 1994 marks the first summer without Mt. Sweet Talk. It will be missed.

It was a beautiful spring day dripping with dogwood in the Carolina mountains when I finally got to hear Connie and Barbara, in person, tell stories to an auditorium filled with kids. Their voices, melodious and rhythmic, crafted words into stories like master quilters piecing fabric into well-chosen designs. The children were enthralled, laughing uproariously at the funny parts and then quiet, intent and absorbed during more serious tales. It is a joy to experience artists who are so good and skilled at what they do. I also enjoyed discovering that, along with their individual talent, The Folktellers® have the elusive chemistry that makes a duo great. You can't buy it or plan it, it simply is. 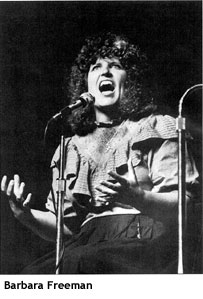 "...with artful direction they lure us into that distant inner space, revealing in us depths of joy and terror, hilarity and grief... one minute we feel the pangs of regret or denial, envy, revenge, even the chill hand of death... in the very next story we luxuriate in the rib-bursting laughter of a mountain Jack Tale... it's all part of – the storytellers' magic.” Barbara Home Stewart writing about The Folktellers® in School Library Journal (11/89) 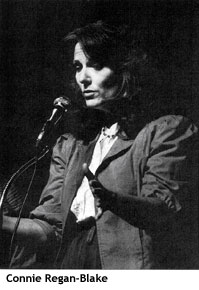 They had a little time to talk after their assembly, and following are some more excerpts from our conversation.

LM: What is tandem telling, and how did you develop it?

Connie: It's working as a duo. We didn't plan on doing tandem telling, it just happened...

Barbara: ... in a parking lot the first week we were out on the road. One of the little children ran over and looked at all the stuff we were taking out of our truck and said, “What are you all doing? "... 'We're storytellers!”..."Well tell me a story!”... and Connie told him Three Billy Coats Gruff and then another one of the kids said, 'Tell Where the Wild Things, Are!”

Well, we didn't have the book with us but we knew it from when we used to tell it as a picture book in the library so . . . 'that night Max wore his wolf suit and made mischief of one kind and another . . .

Connie: There is a group of performers from Kentucky called Appleshop and they had taken a lot of old mountain stories and four or five of them would tell them, chinning in on different things. That was kind of in our minds, but, still, it was that parking lot story that launched our tandem telling.

Sometimes we talk about tandem telling in our workshops. We encourage people, especially newcomers, to take a story that has more than two parts or two characters and kind of go back and forth with it rather than necessarily trying to do things like saying the action words together because I think that really takes knowing each other's rhythms and ways each other says things.

LM: I enjoyed the way you tell a story together, and then each tell a story by yourselves, and then come back and tell together again. The pacing is excellent....

Barbara: We try to work it out where we don't put a slew of funny stories together, a slew of tender ones together, but, rather, go back and forth....

Connie: . . . and build them into a whole concert. Unlike our play Mt. Sweet Talk which has a definite script, we change our minds sometimes once we get up there to do a storytelling concert because we might see that a story has had special impact on an audience. They may have taken it in a lot deeper, so we'll have to give them something a little bit milder, and then lead them into something real, real funny. So we change
our minds. We make a set list usually and put what we're in the mood for and what we think will work by looking at the audience. That's why we get to a concert or assembly early enough to see what our audience seems to be composed of age and personality-wise.

LM: What kind of repertoire do you draw from? Do you have a trunk full of stories up here (points to head)?

Barbara: Yes, we really do. When I wrote them out one time we had about 35 tandems, and we've got traditional packages of, say, our seven favorite stories for little kids, our seven favorites for 4th, 5th and 6th graders, then our favorite little set of maybe four longer stories for high school. For our family concert we might have ten stories that we really love the most if people have never seen us before. We always write down the stories we tell so when we go back to an area or school or theater, we can give them an entirely different program. Then we have our second echelon team of another 10, 20,30 stories, and then we have the ones we can call on if we go to do a week-long residency. We have many, many different stories, but you always have your top thirty that you love to tell over and over again.